Yes, and they continued to use it well after WWII. It was common in most of Europe as the police caliber through the 50's, 60's, and 70's. Also central and south America. America slowly lost interest in it, but it didn't even really go way down in popularity here until the 70's and 80's or so. It used to be a popular caliber for the small pot metal ring of fire guns commonly called Saturday night specials.

One big difference in gun laws between the US and other countries is the idea of "military calibers". There are a number of countries in Europe, eastern Europe, and central and south America where people can own and even carry handguns, but they have to be in a caliber smaller than what is considered militarily useful. Sometimes this is .380 and down, and sometimes it is .32 and down. So you can still find a lot of .32s in use in such places.

The Glock 25, and 28 models in .380 were introduced for south American markets where .380 was allowed but 9mm and up was forbidden. They failed the ATF Sporting Purpose test and were not allowed to be imported into the US. Though I know someone at Lone Wolf Distributing had "acquired" one from Mexico

I bought the gun because I like old guns, and military surplus. It was never intended to be a part of the carry rotation. I didn't think about the caliber at all other than how I was going to get some when I bought it. Alien gear does make holsters for it though 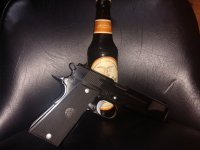 Picked this guy up today 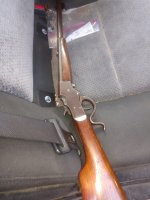 .22. They did make them in .32 rimfire also though. I'd like to find one of those someday too, but at least I can shoot this one.

Model 1894. This would become the Steven's "favorite" later on. This one predates that a little. Somewhere between 1900-14 manufacture. Kinda hard to narrow it down more than that.

If anyone has been following the whole Alec Baldwin debacle, I called bs on him in this one.
G

Don’t own guns but if I did I wouldn’t worry about a semi being an issue. 556 is small and yeah lots of bullets in a unrestricted mag but they aren’t exactly light. Don, you ever hunt out west or LR the last thing you’d want to hump up mountains is anything built on an AR-10 platform. Yeah, carbon fiber pencil barrels and unusable Pistol brace stocks get them down to a svelte 8.5 -9 lbs dressed and loaded. I’ve shot with team USA shooters and a few guys with no eyeballs from Quantico. I’d worry more about what a skilled shooter can do with a dedicated bolt gun. Watch PRS and see how many semis they run. Barricades, obstacles, slings, pods, 50 yards to 750 or more. Semis aren’t going to crash animal pops either. Poachers will still shoot to many and others won’t. My coworker decades ago gave his 17 yo his 300WM to carry. That state had 1 buck tag only. Guy wasn’t much of a Dad and it showed. They recovered 5 deer after he opened up on the small herd cutting through and landowner found 2-3 more shot in the back of the head/neck. Kid was an idiot and no use for Poachers but for little if any trigger time he managed to go 5 for 5 before reloading and getting the last 2. I’d bet most who would pull that off would more likely do it with a 22 mag or something honestly. Most adults can’t fire a medium magnum once accurately. Kid in story went on to be a Jarhead. Last I saw he had abandoned his roots, looked like a different person, runs a training center, pic I saw he was hauling his double amputee buddy on his back the last stretch of a high peak somewhere they’d just conquered together. Guess the time fighting the WOT changed his life views.


Now, if I was a gun aficionado and shot everything from pellet guns to 338 Lapuas /30-378s at 1400+ I’d personally look more at what the PCP guys are doing now with cast pellet/slugs. LR is fun and all but those custom deals can push 4500 psi, carry .45 or .50 slugs a long ways, and sound like a whisper all with no regs on them. Just food for thought. I know a guy roaming an island country killing stuff up to 300 lbs with a .22 version. Aluminum hybrid tipped ammo and some other metallurgy alchemy does interesting things if you’d rather burn powder.
Last edited: Dec 6, 2021
G

If you don’t mind buying guns from Mormons, I wouldn’t care personally but some consider it odd I guess, DTacs SRS A2 puts all kinds of calibers in your hands with a quick swap and goes up to Cheytac if your looking at miles vs yards. If I wasn’t so gun adverse a 338 LM or the recently popularized again Norma Mag with 26” barrel in a package under 37” overall makes a lot of sense. An even more compact form can be had in 300wm if you don’t care for the reach or cost per shot. Running a 212-240 gr Berger hybrid will get you a lot of BCs. If you can track down Henson and get 180 gr Al tipped or his 212/220 offerings if you have a twist faster than 10 to stabilize those loooong bullets. 220 is somewhere near .9 BC, that’s about the highest I’ve heard of or seen. Probably cheaper to shoot a Lapua or Cheytac vs. Henson bullet honestly.

Again, this is all theoretical. Must be watching my kids play FPS games to retain all this. That’s it, burn the Xbox and PS4!!!
Last edited: Dec 6, 2021
G

Another option might be the new Deviant AntiX or Bighorn offers a nice CRF barrel swapping/bolt head swapping action as well. Manners and McMillan are chasing $1k for a stock if you have a year to wait. Element seems to have fizzled. Chassis are coming down in weight but still a pound or more over carbon fiber solutions. Then there’s the barrel wait times. Want a Carbon wrapped Bartlein? Probably 9 mos and $750 for the blank. PacNor rebuilt post fire and and are taking orders again but if you want carbon fiber wrapped there are only a few choices.


For semi vs. bolt gun argue, look at Anschutz’s Fortner offerings. Very similar to Euro PCPs, toggle/straight pull side lever. Try one out and tell me semis are faster or more accurate. Don’t expect many small game hunters in PA will part with that many sheckles but I know one guy looking at them. Designed for Biathalon but now being offered as bare action to build or in a few medium Sporter options. Techies are techies regardless of sport.

If anyone has been following the whole Alec Baldwin debacle, I called bs on him in this one.
Click to expand...

Any possibility they had the trigger wired back for a fanning scene?

truecrimson said:
Any possibility they had the trigger wired back for a fanning scene?
Click to expand...

Pretty sure we would have heard about that by now if that's something they did. There are modified guns setup for "fanning" that cowboy action shooters use too. They basically don't have a sear. Either way would be immediately noticable to even a novice.
G

I’m not too up on news but last I heard it was live ammo. Did see some nonsense he claims he never pulled the trigger now. Assume the civil lawyers are speaking through him but he’ll pay I’m sure. It is more like limiting exposure by creating enough background noises. I expect any news feed will be running 2-3 alt stories for the same affect.

Gremcat said:
I’m not too up on news but last I heard it was live ammo. Did see some nonsense he claims he never pulled the trigger now. Assume the civil lawyers are speaking through him but he’ll pay I’m sure. It is more like limiting exposure by creating enough background noises. I expect any news feed will be running 2-3 alt stories for the same affect.
Click to expand...

Yeah, it was a live round. How that even got on the set is a whole nother problem. Many people dropped the ball on safety for this to happen, the problem is no one wants to take any fault for it whatsoever. Baldwin was the producer and the one who pulled the trigger. So he basically was the first and last link in the chain that lead up to this.