This year I've rebuilt or re-dedicated two old Gold33 by Zebco. They were built before some of you were born. I've always liked them for bobber fishing and wherever accuracy is desired. This year, as you all know I've been slowly learning how to present and fish with rubber baits. Most of these baits are too light for the Baitcasters and so when Skipping Light baits I have found the old pushbuttons excel at this. I mean really excel. Using slippery 4/6/8lb quality and limp Mono line I can really fire Kieteck minnows where I want them way up under the blueberry and shrubs. Its been great.

The bane of spincast reels has always been the retrieve speed. Most of you are at 4.5-6/1 with your spinning reels and 6- 10/1 with you bait casters. The oldies I fish with are only 2.9/1 and although slow it is perfect for throwing the shorter distances when throwing to the banks. There are a few very easy tricks to keep these reels running smoothly. I'll share them at a later date. But it is sufficient to say that at some point many of you, when kids, wanted to chuck your Zebco's into the river.

Recently Lew's came out with a couple nice spincast reels but, like Abu, most are oriented towards beginners, and as you know I'm a pro, lol. This year Zebco came out with a new size 20 and size 30 Braid Ready reel and it has me looking twice and with envy. It is an advanced Omega Pro and sells for a bundle. But in time I'll find it at a Flea Mkt for a song.

Eat your heart out Boot!

There were 7 or 8 very Major manufacturers of Spincast reels during the 50's and 60's. By the 70's-90's there were only five that were of any consequence. They were Abu, Zebco, Shakespeare, Daiwa and Johnson. There were others but these were the ones you saw everywhere. The spinning reel and the Spincast reels fought for position while sealing the tomb on the old fashioned level winds of an earlier generation. Eventually the spinning reel won out and is now on top. Today only Zebco makes any really heavy duty spincast reels and they're made far from where they were invented.
Though I usually fish with spinning and baitcast reels I do use spincast for specific tasks and I usually do very well with them. My favorites are very specific to certain models and only from certain years. Still learning the ropes but I've enjoyed most MD 33 Zebco and one or two others but my favorite are the Johnson Reels from Mankato MN. You say, who? Johnson? never heard of them....well maybe not but you have heard of Minn Kota and now you can put two and two together.
Recently A friend of ours unfortunately lost a loved one and all of us supported him in prayer during that time. More recently this friend gifted me the relatives fishing reel and I am most honored to have it. This was one of the Century series, second generation, Md 345 ( the big one of the series). He dropped it off late one night and I showed him the antique 'Man Cave' where the wife stores me. Once he extricated himself from my awesome driveway I got down to examining the reel and took these photos for your enjoyment. 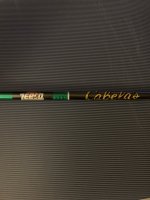 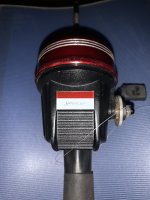 It has the 80's look of many Johnson reels 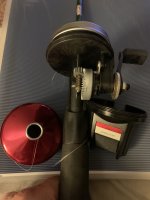 These later series reels were conveniently assembled. If you needed to wash the salt out of them or lubticate them you simply screw off the red cone and then the back will fall into your hand allowing access to the entire drive train.

See the heavy zinc alloy gears? They are completely clean and dry leading me to believe that is wasn't fished much and was cleaned and well cared for. 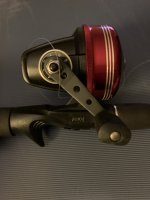 Notice how nice and clean the design is. Easy to hold in palm if you must. Clean and streamlined for skipping and flipping around obstacles. 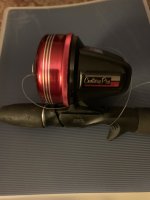 Genuinely elegant reflecting the last of an American icon as it wasn't very long after this that production was moved to the orient. I will be looking for a 6'6" to 6'10" med heavy power fast tip rod for it....basically a modern bait caster rod.

Nice write-up Don. Some of my earliest fishing memories come from using a Zebco Spincast reel. It was my first rod / reel combo that my Dad bought me. At 7 years old, I learned how to take it apart, fix tangles, grease and re-spool it.

I can’t say that I have your appreciation for them today as when I made the switch to a spinning reel, I never looked back but being reminded of the many times fishing with my Dad, Mom, Brothers, Sister and Grandfather are all baked into that Zebco, and for that, I thank you.

So sweet Don. Love it!

I’ll SNAG a couple of members yet into carrying one of these for dock work. Glad you enjoyed it.

Don said:
I’ll SNAG a couple of members yet into carrying one of these for dock work. Glad you enjoyed it.
Click to expand...

Don said:
I was the only fisherman in my house. I was told to be careful and take care of it cause there won’t be another. So I made the line last for for five years and was down to a half spool at the end. I only oiled the crank as I didn’t know better. Times have changed.
Click to expand...

Neat read don. I haven’t seen a reel like that since I was a kid. Also can’t believe you are into zebco.

it fits my arthritic hands well. I use them for specific tasks and theyre cool. I didn't used to think they were cool.
B

All you need is a Crème scoundrel worm to complete the rig.

When I was a kid my neighbors would make a trip to Canadian lakes every year. One year they took me to Perth, Ontario. Every rod had one of the Johnson spincast reels on it. Many a walleye was brought in on those reels.

The red one featured above went into service yesterday. A coating of hillbilly snot was added to the gear and some oil. Works very well.

Recall Johnson was out of reach for us meer mortals as a kid. Still big in Bass circuits. Etc. Open face was alien still. Old Zebs with really old line were the huckleberry. Probably missed Bass Pro greatness handicapped by old fragile line. Caught everything from 4’ pike to 9 lbs LMB to sunfish on them. The black/gold nice zebcos where not to ge touched. My uncle had 2 in a horizontal gun rack on his porch with a few doz old setups under stacked in corner. We all had favorites and when they got snarled or brittle we’d try and pick another dusty model as our new favorite. Uncle just hit 60, terminally I’ll, should get up there to find one of the old rods and fish with him. The old glass window porch became a breakfast room and camp became a $1mn house probably.

Always hard going back to a prior life.

Ah, Oh, Sorry to keep you waiting for the Spincast News. I recently found and #8 Dale Jr reel and have already sold it to a lucky collector that is a fan. Great Little 33 "Authentic" platform. Isn't this fun 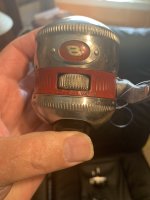 And There is more:
I felt that although I'm enjoying all the antiques I fish with it may be nice to try some other The newer stuff. Ya never know what will become tomorrows "classics". So I bought this fine little Lew's and plan to get it wet tomorrow. It has passed the Pool fishing test and has been re-lined with 6lb Seige. 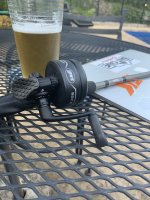 While it is a beautiful Reel it is going back Monday. It has serious issues that developed in the field. Serious rasping noises. Can't cast any usable distance. Oh well. I did my part and tried it.

Never never have I like spincasters!!! All my freshwater fishing is done with ols school Mitchell's. I like to see any line problems, right in front of me. And they cast with the best of reels now & then. 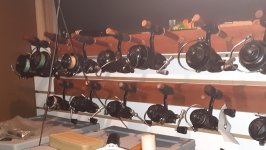 Last edited by a moderator: Sunday at 7:36 AM