What did you Catch Today? 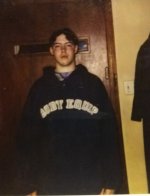 Well, then this was me a week ago Tuesday.

Went to my dock with the boys. Ended up taking my daughter to work at hatchery Father’s Day and ran until 9pm on a quick project.

Felt like things where off at Dock. I always pull in and the owner is sitting in doorway with front door open, glass screen closed watching his tv. Never not seen him there. Stomach sank, he’s had cancer so I’ve avoided with kids being sick 5-6 weeks or more, hard to say years feel like hours lately. Saw some odd ladies at the table with kids.

Took boys to dock thinking we’d say hello when he popped up but had bad feelings. His son came in, the son’s mom watches his kids. Saw kids leave and son waved really wide grinned from his truck.

My kids caught 30+. 10 yo was on again off again from SUV reading to fishing. It’s been a bit hard the last few years. He’s 10 going on 30 and struggling with the idea of hurting or killing fish if they don’t recover with wanting to keep the big ones.

Anyway, 6 yo is all about it. He caught 3 big rainbows but a giant 27-29” red phase brown was being picky on us. All kinds of craziness with rainbows, a few tigers, and big Brookies. Let 6 yo keep the first huge rainbow. Then the second. His first tiger was a beaut but we usually don’t keep them if they don’t fail to recover or aren’t exceptional specimens.

Ended up with 2 big rainbows, 2 that failed to recover, and when kids bailed to SUV my first monster brown hit. I’d switched from 4lbs Seaguar to 10 lbs seeing how aggressive they where. Big brown circled dock then finally grabbed my bait after hours of trying. Head shaking violently he cruised past. Broke 10 lbs leader with 0!!!! Tension. Had reused a lot and probably caught in hemostats a few times. I kept checking my leader but must’ve nicked it a few times with hemos and just failed to notice at end. 32.5 hrs 30+ fish, many doubles, you get tired and sloppy I guess. Or he got lucky hitting it with a tooth but I caught 45 lbs Kings on lighter.


Still 0 on browns over 20”ish,,,,,, the son that had driven in rode back by as I was packing up. I told him I wanted to see his Dad but if he was resting I’d come back.

Mixed emotions, mostly sad after. Youngest fell asleep on ride home as I grappled with things. Lost my Dad at 17 when he was 39 and lots of people I’ve cared about have passed. Just resurfaces stuff and even worse not making the funeral for the family.

I had to fly to Atlanta at 6am today. Debated canceling but just lost on what to do. Friends with his kids and love his wife but we hardly spoke. His kids I knew a bit better.

Decided I’ll figure out something more meaningful than a bouquet since she likes to plant flowers. I don’t know what but I’ll bring it by Sat and drag my kids there to cast a line every few weekends to check on her. Both sons live almost adjoining property but they’ve a company to run.

The relevance here is I decided to put a tape on my youngest 2 kept bigger fish. The brown and others dwarfed them. Seemed maybe 18” but used a flex tape as a pseudo stringer. After 2 I told him rest where released.


Both broke 20” and pushed 21”. Rainbows are my favorite. That brown would’ve broken a streak but that’s for another day I guess. All my kids have been spoiled by a guy who adopted a stranger without reservation. Eulogy talked of a lot, didn’t mention the Christian kindness of an older small town guy to a dumb kid like me. I can’t put it into words and it cheapens it to try. Last kid, youngest kid, broke 20” at Gene’s. He’d have laughed, congratulated him, maybe put him in a dozer to smash stuff like before.

Gene knew what mattered and material possessions didn’t make the register. He instantly adopted my family and treated my kids like his own grandkids from the first time they met. 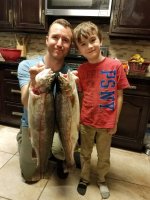 Sorry for your loss @Gremcat

I hear the sadness in your story and will pray for wisdom and comfort. Prayers for the spirit

A-5 said:
First a kid should never ever have the same sock and as for my kids they just dont wear socks to avoid the extra step of life
Click to expand...

Haha, mine never have matching socks. Must be spending too much on fishing gear, lol.
G

Was waiting to see who here and in a Friends only FB post who’d notice. A-5 for the win with his attention to detail. Should’ve guessed, he sent me 6mm painted beads for steelhead and they had little 2-3 color circles painted on them. 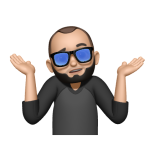 Sorry for your loss Gremcat.

I tried the 4wt out, had a few attempts but got this one. 4wts make small fish fun. 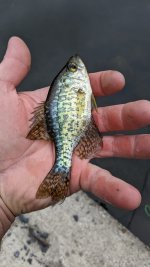 Not much action with the insects this evening, temps dropped fast. Here's a short vid of a smallie. Hard to figure that they're already stacked up in areas with lots of current and oxygen but that was the case today. Steam rising off the river at 9pm.

Learning to use plastics. Today it was senko, Ned and and some whacky. Ned won. By a landslide Ned won. 3" Green Pumpkin Yum Dinger was todays color and size. 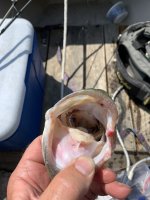 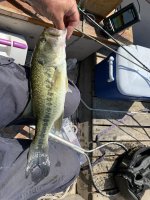 Had a little variety this evening on the Susquehanna. 3 nice sized smallies, quite a few smaller ones, 1 fall fish and a beautiful channel cat. Only got a couple of photos and one video with a bad camera angle. 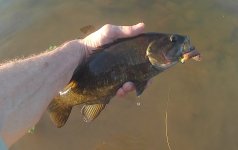 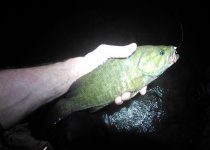 2 bows and a small fallfish 1 bows was nice close to 20 inches.Smallmouth fishing so far is terrible don’t no what’s going on there.