Just thought I would create a thread for anyone that plays Fantasy Football. I've been playing for TOO many years and was involved in too many leagues but through the years I have narrowed it down to just the one this year that I run in my neighborhood the last 10 years. It's ALOT of fun as we all know each other well and have become good friends.....several of them, fishing friends.

Anyways, if you have advice or something special you want to mention about what Won or Lost you your week, post it up!

This week for me I swore I would lose as my Opponent had Josh Allen Thursday Night and I had Cam Akers. Akers did nothing! and Allen put up close to 40 points and then my QB Burrows threw more picks than completions to start! Ugh! but he persevered to get me 27 points but then Jefferson, Adams and Edward-Helaire stepped up big time to get me the win.

Can’t help out at all but good luck hope you win some money. 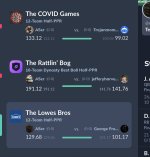 Nice Man! That is hard to do!

Burrows did not look good early on in that game, mostly I believe because of the Steelers defense, now missing TJ Watt. Plus the Bengals have some new names on their offensive line. It's gonna be hard to beat the Bills this year with their defense and Josh Allen is a beast.

A.J. Brown - now on the Eagles is just amazing. They play the Vikings next Monday night so we'll see how good the Philly QB is.

I don't play Fantasy but I can't help seeing the rankings on the bottom of the screen on NFL network. I'm always amazed at how many of the top 10 or 12 QB's ended up losing their game. I think the Fantasy stats are skewed. Some teams are one dimensional or become one dimensional when they are getting blown out, nothing but passes

As an Eagles fan. Jefferson scares the heck out of me next week!

I so want to give the guy a chance every week but then I see him play and it's it's like watching a train wreck. On the other hand, he gets fantasy points. I say Howie makes a deal right now, trade Hurts and a #1 to Green Bay for AR.

I personally loathe Rodgers But he’s a goat so …


They just ran him in the red zone till he scored. He threw one nice ball. The other 90 percent of the game he looks to me to be in pain.

I have Ekeler. Go bolts

But we only get to watch if we have Amazon Prime. WTF! What a terrible move by the NFL.

I had no idea about that until I read your post. I just today received an amazon order for some gear for work that required expedited shipping, could've saved on the shipping and got to watch the game if I had went with Prime.

troutspinner said:
But we only get to watch if we have Amazon Prime. WTF! What a terrible move by the NFL.
Click to expand...

troutspinner said:
But we only get to watch if we have Amazon Prime. WTF! What a terrible move by the NFL.
Click to expand...

Who doesn’t have Amazon prime?

A-5 said:
Who doesn’t have Amazon prime?
Click to expand...

I don’t! I stopped subscribing about a year ago. I have found that the next day shipping that is promised with the subscription, often turned into 2 days. Now I just select free shipping and get it in 3 or so days but the tracking is much more accurate. I can’t tell you how many times while on prime it was “out for delivery” to only be delivered the next day.

Nice. My son sent me a link so I was able to watch it. Kids always know the work around. Lol. The game however was lack luster in the first half and then I went to bed.

I had Edwards-Helaire last night and my opponent had Mahomes and JuJu so I got the better end of the deal overall last night. I’m in good shape heading into Sunday.